Now that we’re happily unemployed and on the road, we wanted to list some of the preparations we completed before starting our trip.  Hopefully this information will be helpful to those looking to plan a trip of their own; or at least provide a mundane distraction to those stuck in cubicles 🙂

The vehicles we previously owned, and have since sold, were meant for sitting in traffic and grocery gettin’ on The US of A’s beautiful roads.  Our new vehicle, on the other hand, is the foundation of our home, our guest room, our closet/storage room, and most importantly, our ticket to freedom.  Once in Central and South America the truck will also need the ability to climb mountain passes, navigate tiny villages, swerve around livestock, avoid sinkholes, and jump countless topes, all while being driven by an Amateur.  Below is some of the work we’ve completed to get the Tundra ready.  I wish I could have compiled a sweet 80’s montage video of all the work; unfortunately you’re left with a blog post and a couple pics.

Bilstein 5100 Shocks – Front and Rear Bilsten 5100 shocks provided a bit of lift and handle the camper much better than the old/stock ones.

Tires – We chose to go with a set of Cooper AT3 (E Rated) tires for the truck and spare.  Opinions on the best overlanding tire were all over the place and we ultimately made our decision based on the following Expedition Portal article – “Where The Rubber Meets The Road” 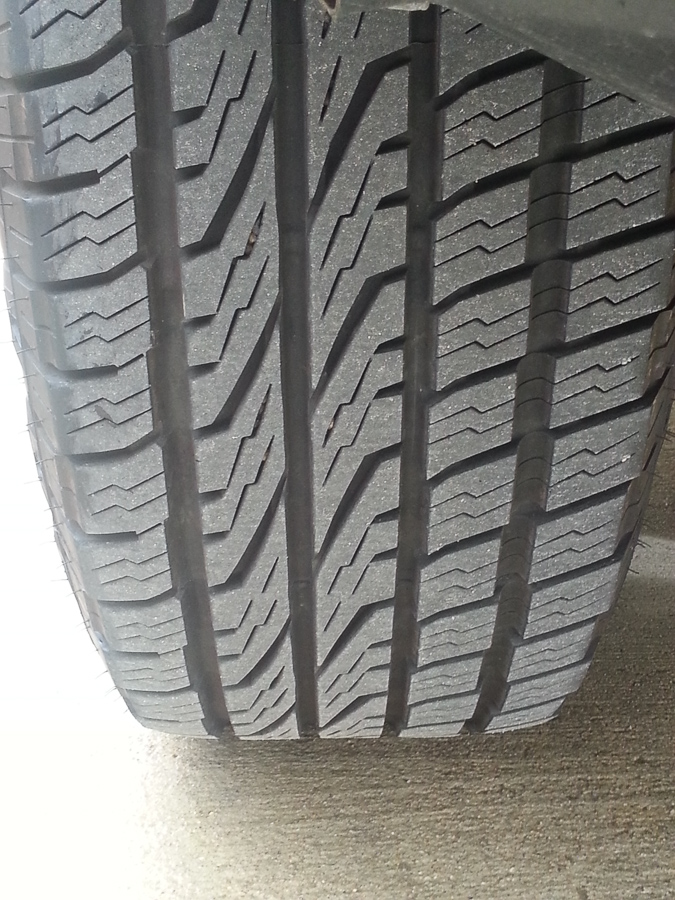 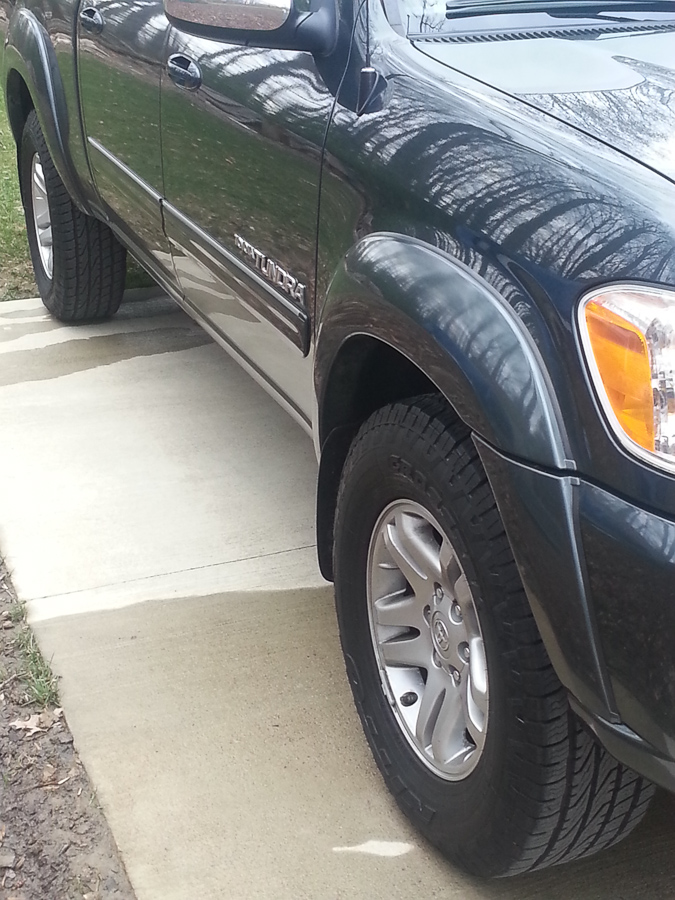 Super Springs – Super Springs are a self adjusting leaf spring enhancement.  Sounds fancy but it’s basically a bolt-on leaf spring with rollers that progressively adds tension based on the load.  You can also adjust the pre-load amount when installing.  We chose Super Springs over an air bag system to avoid potential blowouts down the road.  We have no complaints thus far, so hopefully this was a good decision. 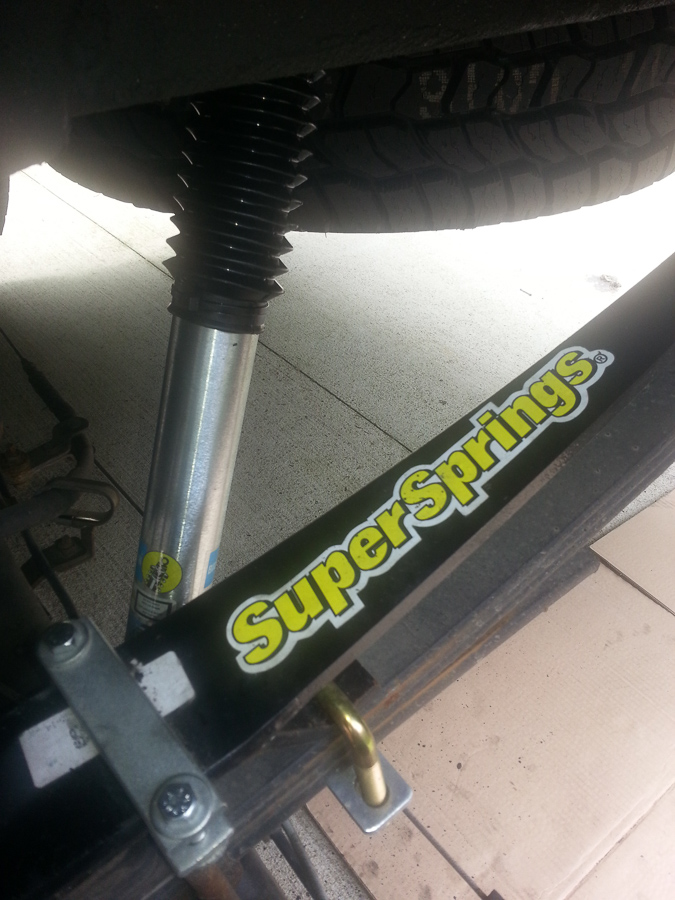 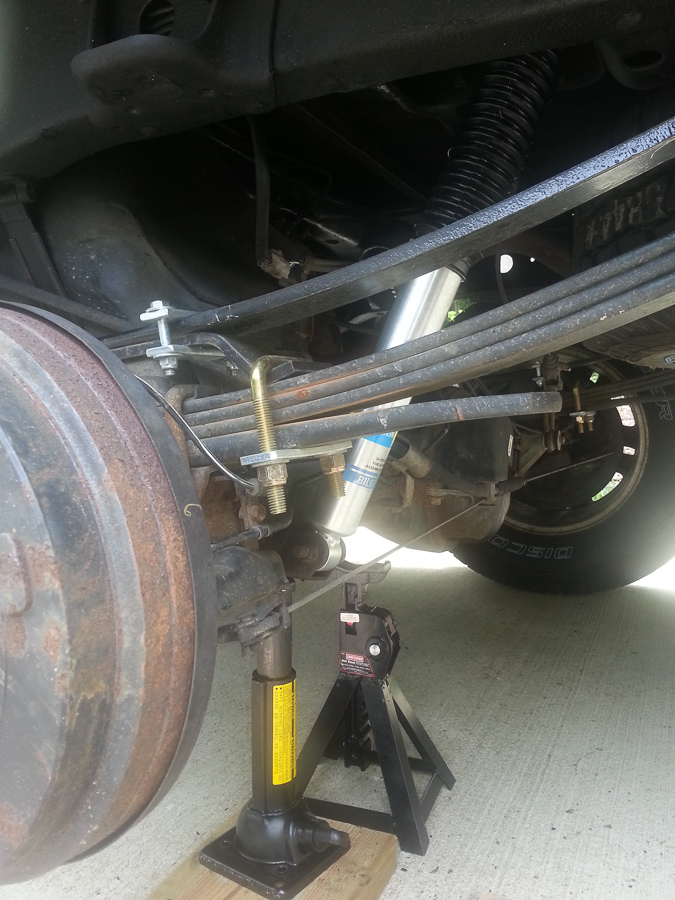 Timing Belt – We bought the truck with 112K so the timing belt/water pump needed to be replaced.  I didn’t have the time, or the know-how, for this job so I let Toyota complete the work…Expensive!!!

Brakes – Replaced the front pads and rotors with premium EBC components and bled the lines.  Planning to replace the rear brake shoes before entering Mexico. 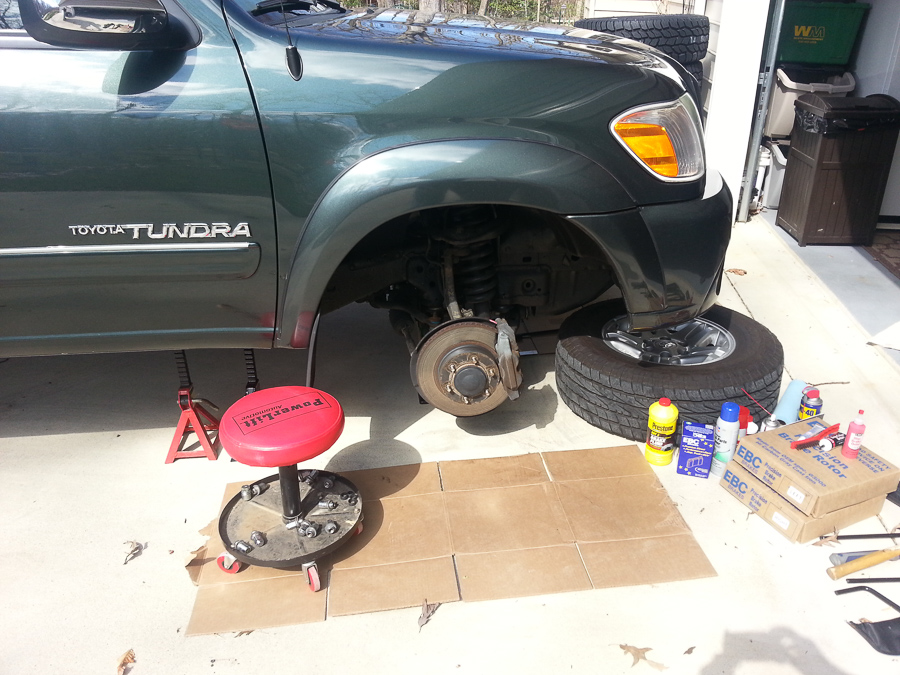 Blind Spot Mirrors – A small but VERY handy addition.  Used these little buggers while commuting in Northern Virginia so you know they are well tested.  These are especially helpful now that my rear window and blind spot are blocked by the camper. 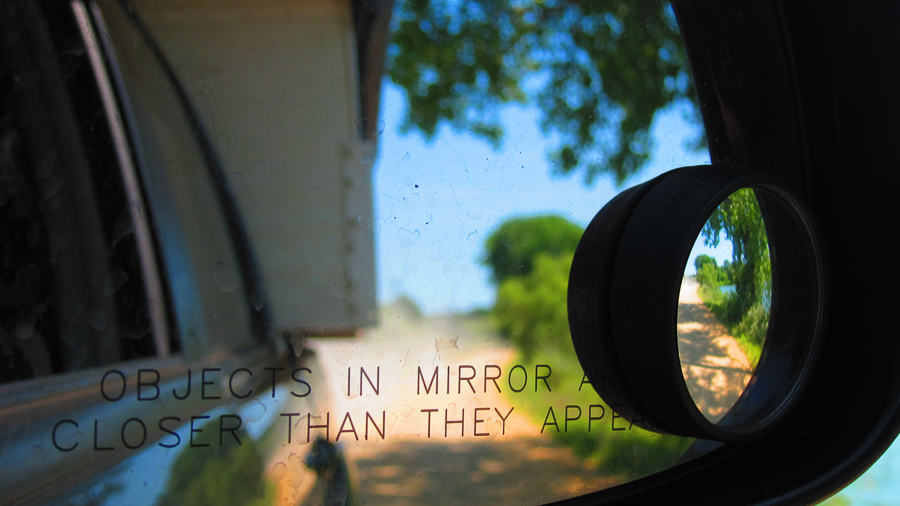 Viper Security System – Hopefully the banditos aren’t reading this post 🙂  We chose one of the 2-way systems with a built in starter-kill and an auxiliary option to roll down the truck’s rear window.  The rear window option was added so that we’re able to climb from the camper into the cab of the truck if needed.  Unfortunately the alarm has been going off randomly and we have been unable to pinpoint the trigger…still a work in progress.

Update – We installed a battery isolator tied to the truck ignition.  This connects & separates the truck and camper batteries when the truck is turned on & off.  So far this has resolved the security system false triggers.  We believe current flow to/from the camper was triggering the alarm.

Security Film & Window Tint – Security film is a very thick window covering that holds the glass together during breakage.  We know that this will not prevent someone from getting into the vehicle if they really want in. However, this should help with “smash n grab” attempts where the thief is looking to get in and out quickly.  We want them to have to work for it!!!  The video below shows how this would work against a lazy actor-thief.

Rust Treatment – Baja and some of the other coastal areas will be brutal on the truck frame and other metal due to the salt + moisture combination.  I originally planned a lengthy and thorough rust treatment process which involved scraping/sanding away surface rust, power-washing and drying, using a rust converter on the remaining rust, then priming the converted metal, applying POR-15, and finally coating the entire undercarriage and additional areas with Fluid Film.  That didn’t happen.  The increasing pressure to get on the road and the temptation of “driveway drinkin” with friends and family while I would work on projects was too much.  I ended up converting some of the rust spots, priming a few areas, and coating a few bolts…oh well.  I still plan to bathe the Tundra in Fluid Film before entering Baja. (Update: That never happened either.  Instead we coated every inch of the truck in mud on our little Baja adventure.)

Removed Rear Seat (Storage) – The Tundra has a 70-30 bench seat in the rear.  We removed the larger portion for additional storage, bolted a large locking case through the floor, and added some storage drawers/bins for our “reach-in closet.” 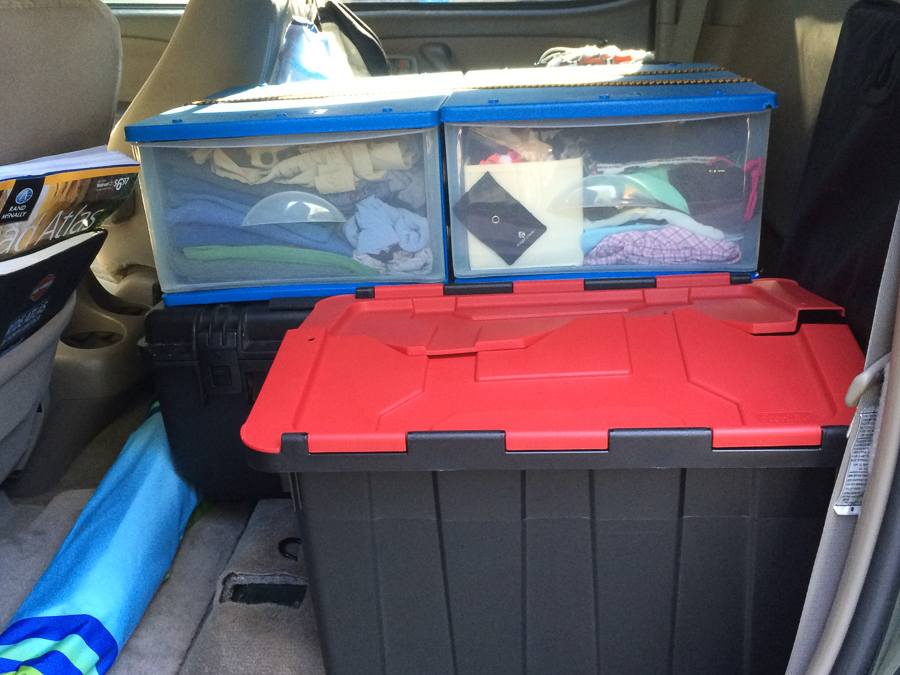 License Plate Locks – Replaced the license plate bolts with smaller diameter round-head screws so the bolts would spin in place rather than loosen when turned.  Then we glued on some nyloc nuts to fasten the bolts, and drilled-out/stripped the heads.  If some jerk wants em’ he’s gotta work for em’.  Plus we have a couple spares 😉

Camper Mounting Points – In lieu of the standard eyebolts used to mount a Four Wheel Camper, we chose to bolt down 6 inch sections of Superstrut using 3/8 inch grade 8 bolts.

WeatherTech Floor Liners – We received these as a gift from friends and had no idea how much we would need them.   Getting in and out of the truck constantly brings in a lot of mud, dust, water, etc.  Not to mention a ton of crumbs when I try to cram snacks into my face while bouncing down washboard roads.  Thanks Jack & Elainna! 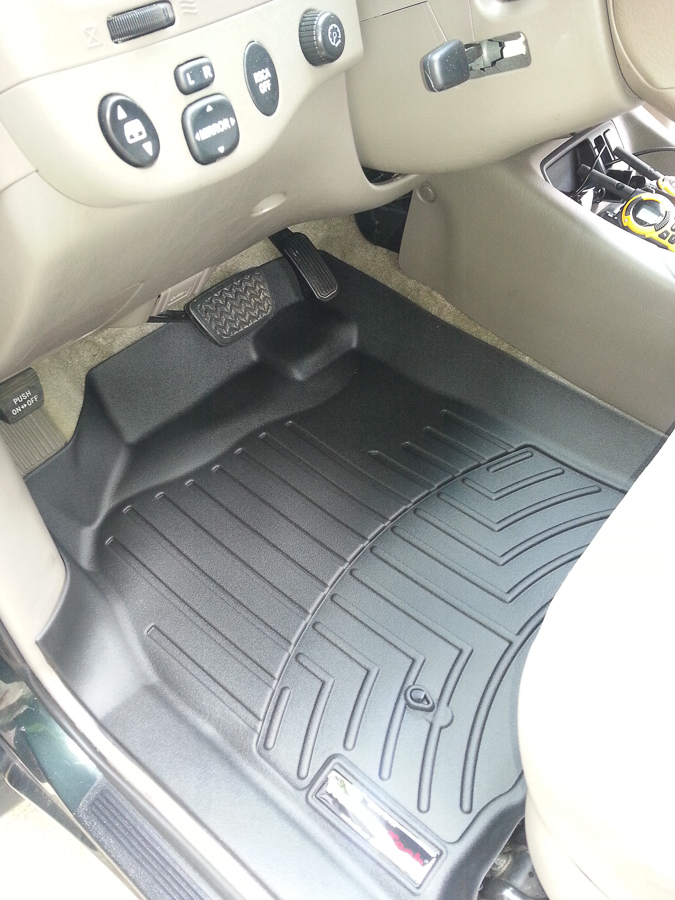 Here’s to hoping these truck mods work out for us.  Next up…Trip Prep Part II – The Camper.