From the moment we stepped off the plane we could feel the energy. Colombians have a charisma, a spark, a bounce in their step. It’s as if they walk through life fueled by sugar laden coffee, ready to instinctively burst into salsa at the hint of reggaeton. For many Colombians, this is no exaggeration. “Tinto,” a combination of coffee made from “second-class” beans and wayyyy too much sugar, is available everywhere. Feeling sleepy? Aproximately $.10 U.S. will score you a cup of this red-bull-esque concoction and get you moving. 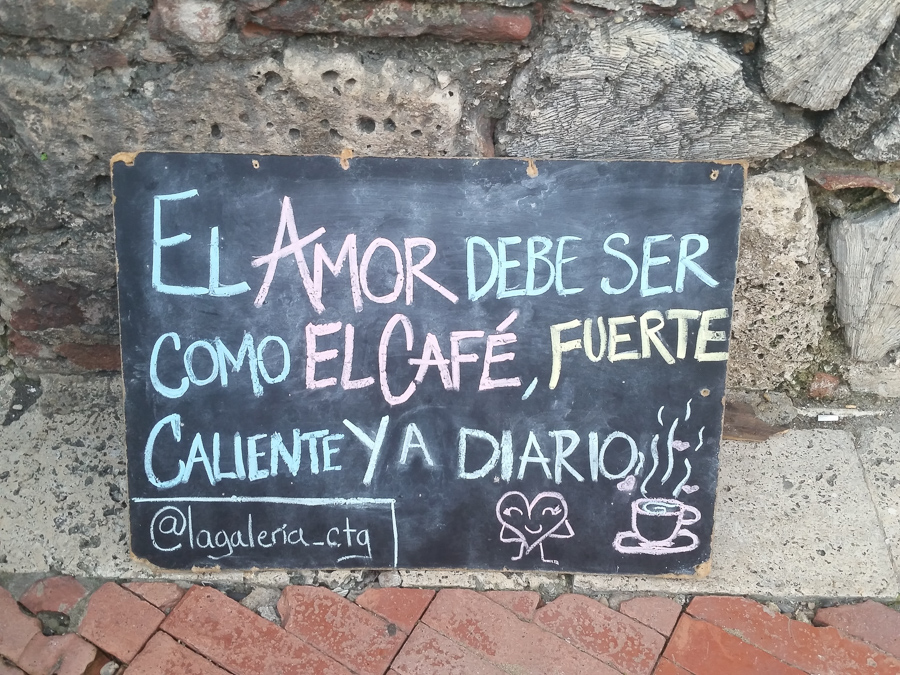 I’m pretty sure a Colombian’s first step is a dance move and their first word is Aguardiente. The adage “It’s in their blood” is entirely accurate, but I’ll let you decide whether I’m referring to the Aguardiente or the Salsa. To clarify, we’re talking about the type of salsa that makes gringos look like we were created with a lack of hip joints. Ever seen a Shakira video? Yep, Colombiana 🙂

I’ll Hold Up The Wall

Fortunately, Colombians are the most outwardly friendly people we’ve met on this trip and are more than willing to forgive our anatomical lack of rhythm. The Caribbean & Pacific coasts, incredible mountains, Amazonian jungle, coffee country and colonial towns ALL take a back seat to the people of Colombia.

Spend enough time in country and you’ll be invited onto that daunting dance floor, out with new amigos and into stranger’s homes. “Colombia is for everyone” was not only a phrase we heard often, but a theme across the nation. If you only know this country as the backdrop to Narcos, consider yourself a bit behind the times. 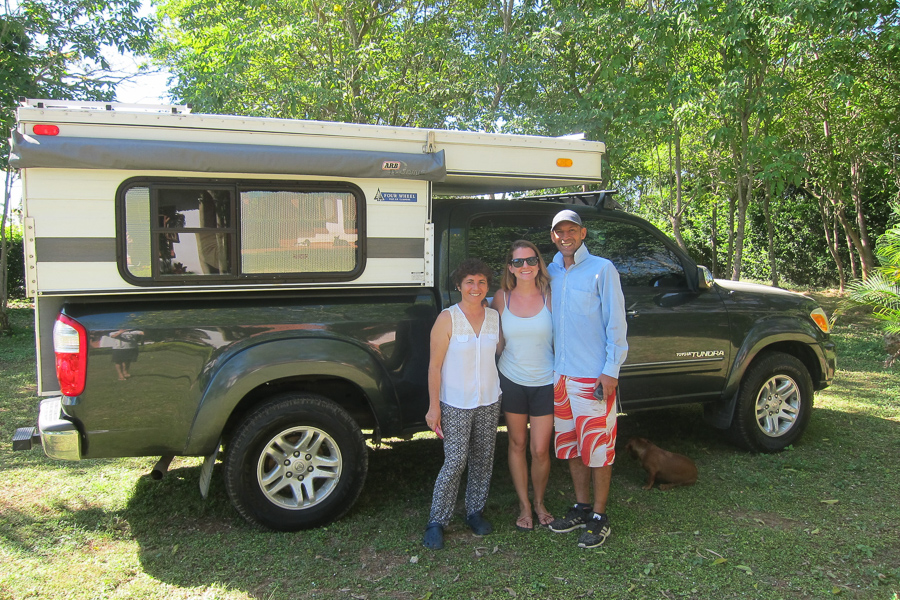 Camping with a family near Cartagena.

After over a year on beaches throughout Mexico and Central we were ready for a change in scenery. Christmas in Cartagena was incredible, but the mountains were calling and we opted to skip the remainder of the Caribbean coast. We somewhat regret this decision but it also allowed us to spend more time in the places we came to love. There just wasn’t enough time to explore this amazing country. 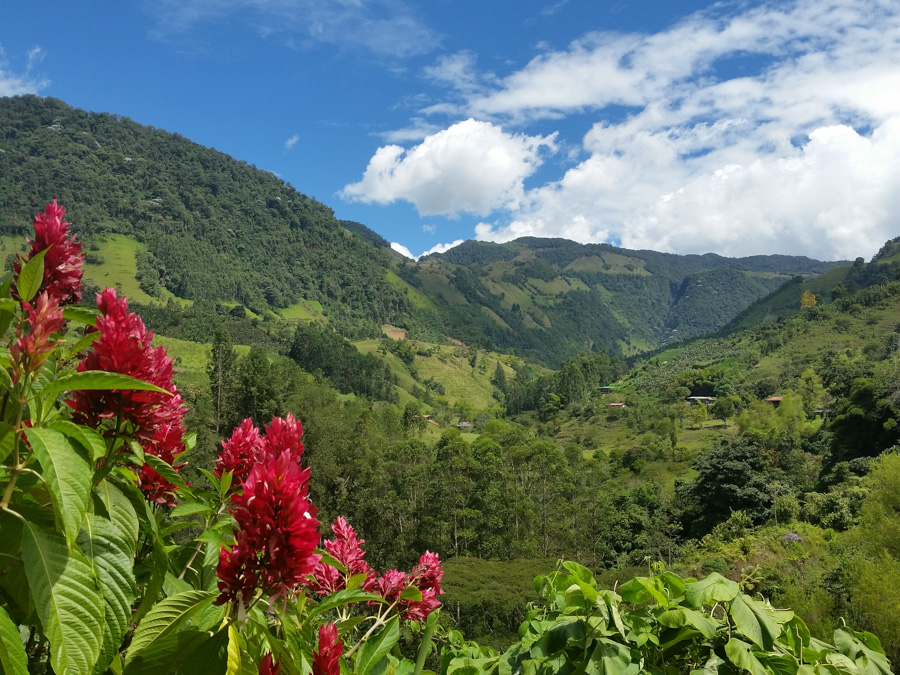 Our first stop out of Cartagena was a quick detour north to Volcan del Totumo. After hearing stories of awkwardly floating with strangers in gurgling gray mud, we couldn’t resist the opportunity to get a little weird, and the oddity of the process did not disappoint. Drive up, pay the entrance fee, hire a “helper” to document the slop-fest since you’ll be covered in mud, then flail uncontrollably as you try to try to “swim” through a buoyant mess of slippery humans.

Afterwards you can either clean yourself off in a soupy brown lagoon or pay a wee bit more for a lady to baste you with murky lake water and run her hands in and around all your crevasses. I chose the not-so-sexy rub down. 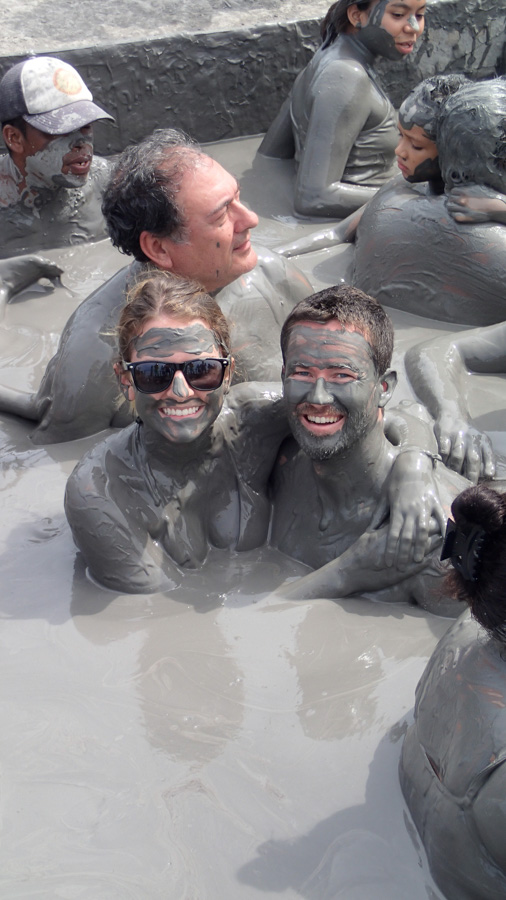 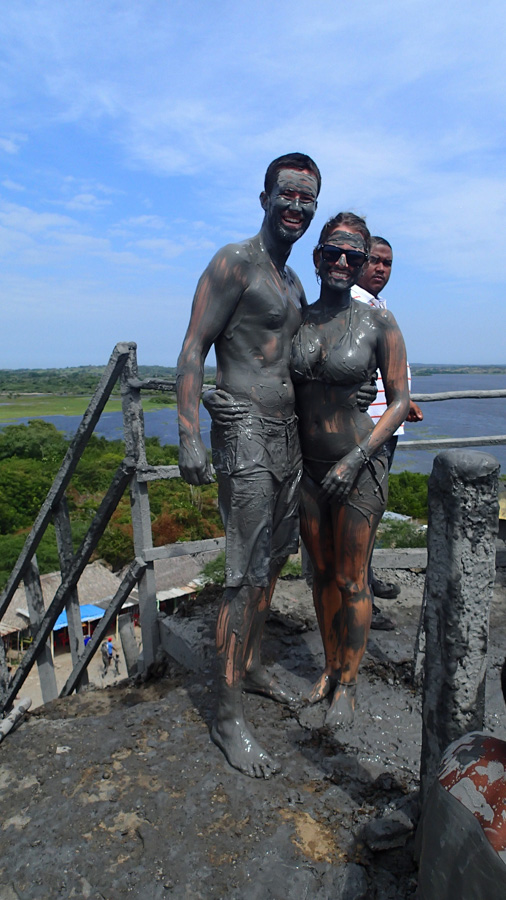 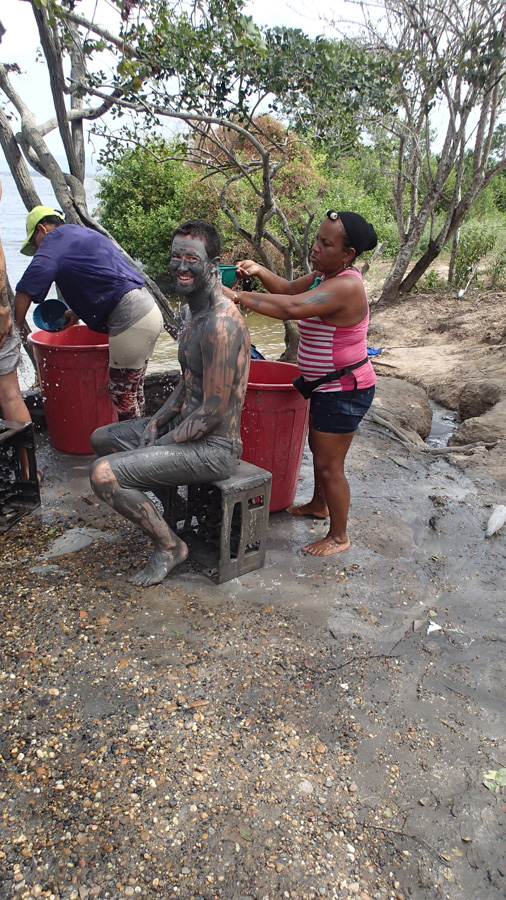 Colombia was also our first taste of driving in South America. These countries are massive in comparison to Central and we had to adjust our driving plans to include extra snacks, water, playlists and road-side pee breaks (See Jenna’s must-have item!).

We broke up our route south by sleeping at a gas station and then estimated that we could easily reach our destination by nightfall; especially with a cup of tinto in the gut! At this point it’s worth mentioning that Colombians want to die. Nothing in their demeanor or lifestyle points to this, but their driving habits prove otherwise. With nonexistent passing lanes, forever curvy mountain roads and truckers that are either Driving Miss Daisy or trying to win the Grand Prix, our day turned into a repetitive game of pass-the-truck-and-don’t-get-killed-by-the-oncoming-vehicle-doing-the-same.  It’s either play the game, or go 10k/h behind a never ending line of smog…choose wisely. 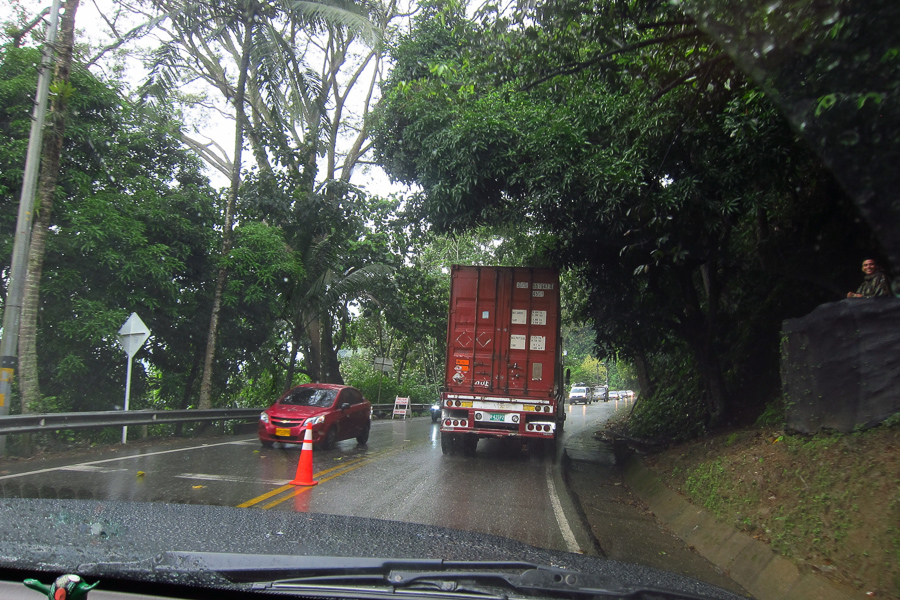 I Thought Texting Drivers Were Bad

Tortuga has a V8 and the power to jump around these hogs but there are a few variables not yet mentioned: 1) Colombia is chock-full of motos who also want to die and love your blind spots. 2) Mountain fog and rain makes the pass-the-truck-and-don’t-die game something closer to head-on-collision-roulette. 3) Colombian dogs have no fear of rapidly moving steel. And finally, 4) “Is that a fu$%ing toddler in the road???”

On a planned 6 hour drive day, we were passing the 3rd overturned semi at the 10 hour mark. We had overtaken 100+ trucks, swerved around dozens of dogs (most alive), cursed out countless motos and avoided hitting a few unattended children. Hanger-prevention snacks consumed and water gone we approached Medellín and turned off the highway to find the road to Santa Elena. 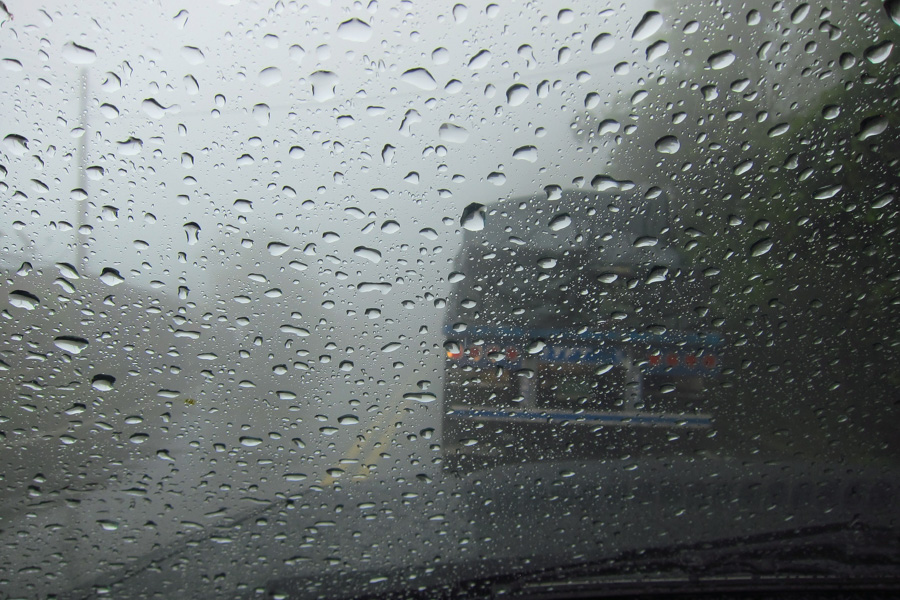 all clear to pass???

In true Colombian fashion, the small town our navigation took us through was in full celebration mode, and one of the traditions for such a holiday included teens banging on cars and asking for money. We would later find out from our camp host that they collect money to buy fireworks for graduation, BUT they tend to buy beer with the money instead. Booze & fireworks?? Kinda wish we stuck around.  😉


Instead we squeezed through the crowds, drove up the incredibly steep back-side of the town and dead-ended at a house, a field, some dogs and a horse. At hour 12, or was it 13? of driving, the kind people from the house confirmed that my GPS had failed me, and pointed us back the way we came…yay. 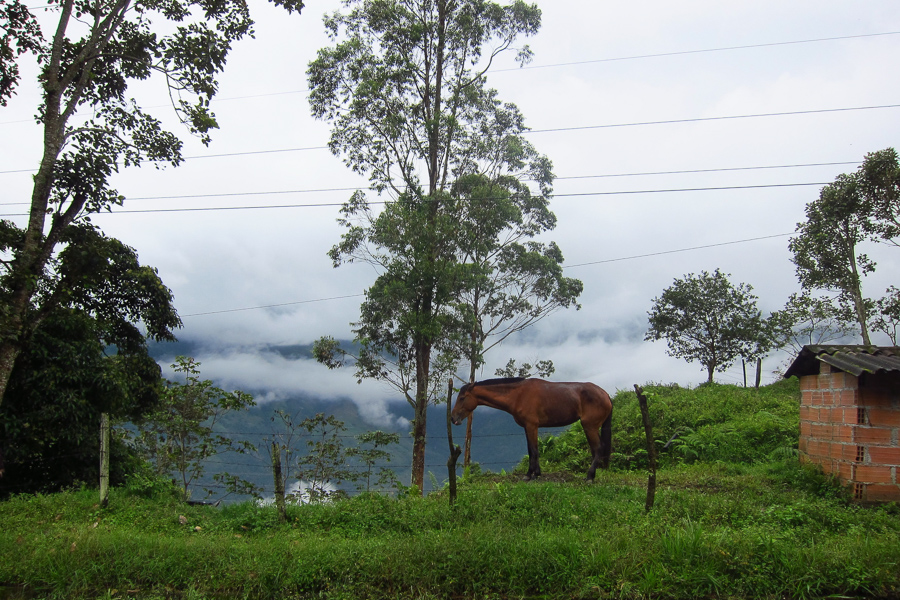 So Close, But So Far

Driving through town, again, was just as fun at night and we eventually found the right road…but what’s with all the cops? Oh, there’s a massive landslide and now we have to drive through the sprawl of downtown Medellín to reach an alternate route? Perfect. Lucky us. Can’t wait. Lovely. Peachy. Fuuuuuudge!!!”

More hills, more traffic, more crowds and more expletives. Several brutal hours later we reached our destination with numb asses and fried nerves. Instead of our typical celebratory beers it was all we could do to babble some incoherent Spanish to the camp host and pass out to the sound of our exhaust cooling in the night…ping……ping…the marathon was finally over.

I know that was a lot of complaining but I’d rather apply sunscreen to a hairy back than do this drive again.