The country that’s crawled out of the dangerous reputation of Central America to become a go-to for vacations and honeymoons.  With a nod of approval by the State Department, you’re free to roam amongst monkeys, dip into her hot springs and zip line your way across the lush and plentiful jungles.  “Environmentally friendly, beautiful AND safe” says your local, endangered travel agent. Costa Rica 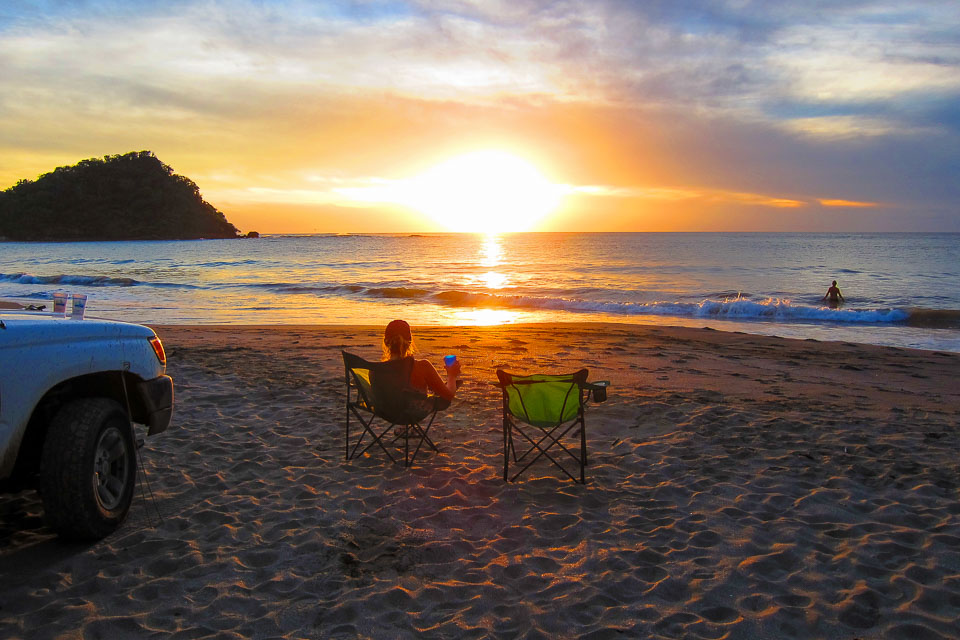 With such an endorsement we were less than excited to enter Costa Rica.  For us, this trip has been about exploring the places we likely wouldn’t have chosen to visit on a vacation.  So an expensive country full of resorts and tourists didn’t have that je ne sais quoi.  Or so we thought…

After a long, but relatively easy border crossing we met up with our new friends Taylor and Mitch to explore what Miss Pura Vida had to offer. 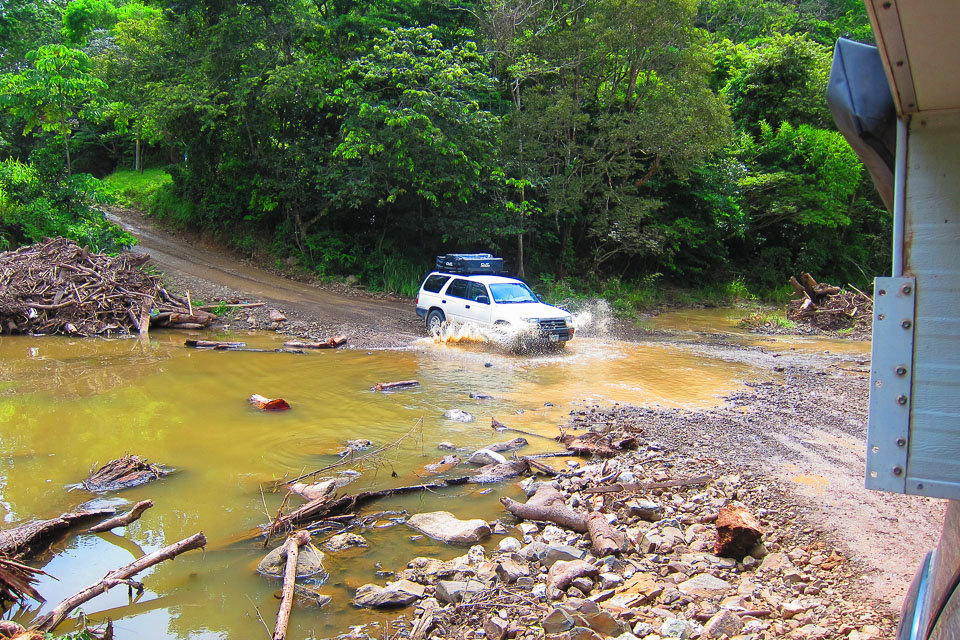 Less than 60 seconds into our 7th country, we couldn’t believe our eyes.  Hundreds, if not thousands, of refugees blanketing the road sides. Metal scraps, wood and fabric formed into temporary shelters.  Men, women and children sprinkled about with a look of endless waiting, wanting on their faces.  These people were not from here.  Not from Nicaragua.  Not from Costa Rica.  The slow transition of appearance we’d experienced moving from country to country didn’t agree with the people we now passed carrying so many questions, so much sadness.

We later learned that these immigrants from Congo, Haiti and other places have found themselves stalled in their journey to reach the United States. Months spent walking, waiting and surviving in the border towns we avoid, for a chance at what we have back home.

Costa Rica allows passage for these refugees, and has a history of doing so.   Nicaragua, not so much, leading to a serious road block in their travels.  Since witnessing this event, we’ve crossed four more borders.  We filled out some forms, ate some snacks, showed our passports and were welcomed into each new country.  For all we know, the faces we saw that day are still there, still waiting, while I walk around with a golden ticket.  Realizing how fortunate we are is a daily occurrence on this trip, and we’re thankful for the reminders. 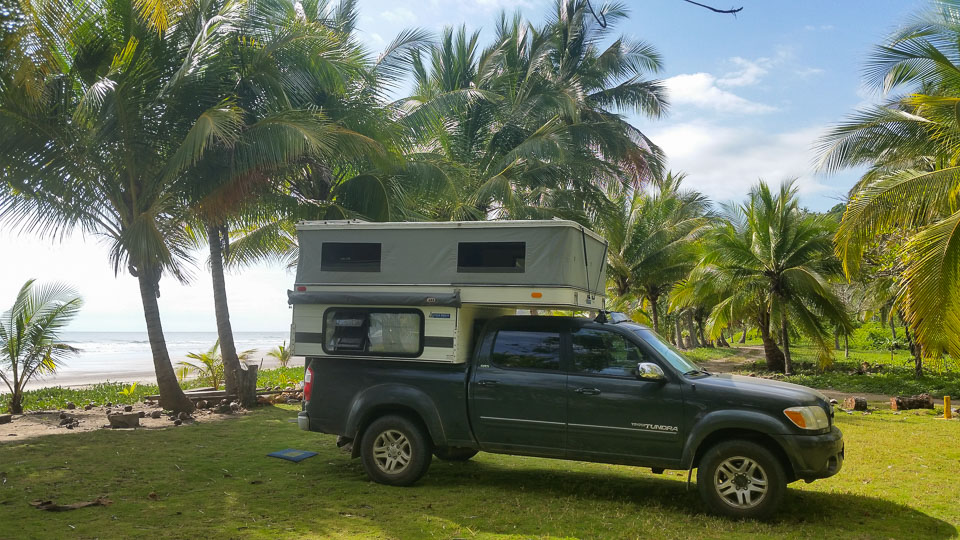 And so began our time in Costa Rica. The country that shattered our expectations and left us with stories to tell.  Here’s one of many…

After weeks of long walks, river crossings and boondocking on beaches, we decided it was time to explore a town or two.  Mal Pais was less than a day’s drive away and had been recommended by our good friends Eric and Susan. 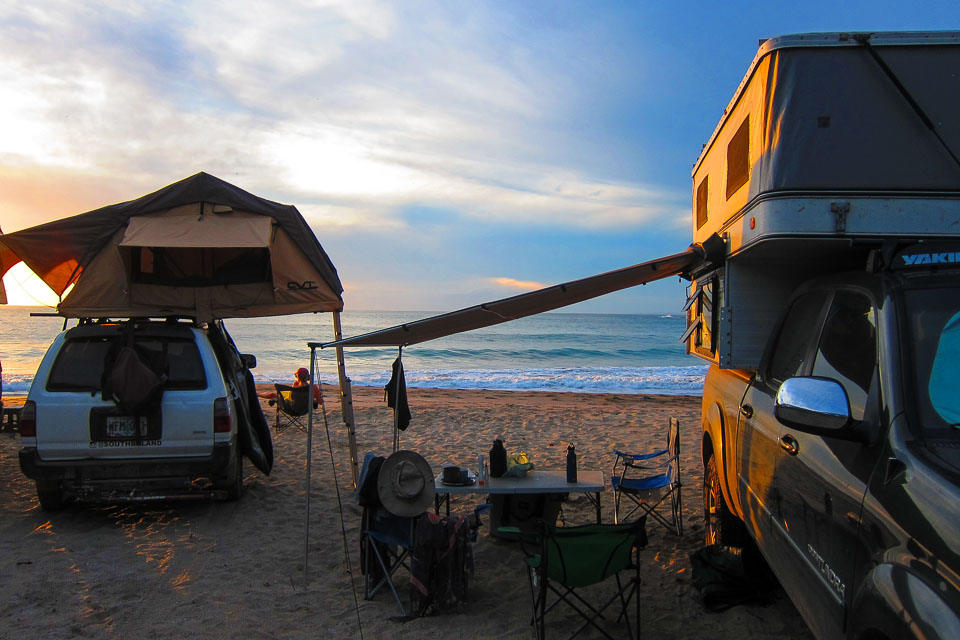 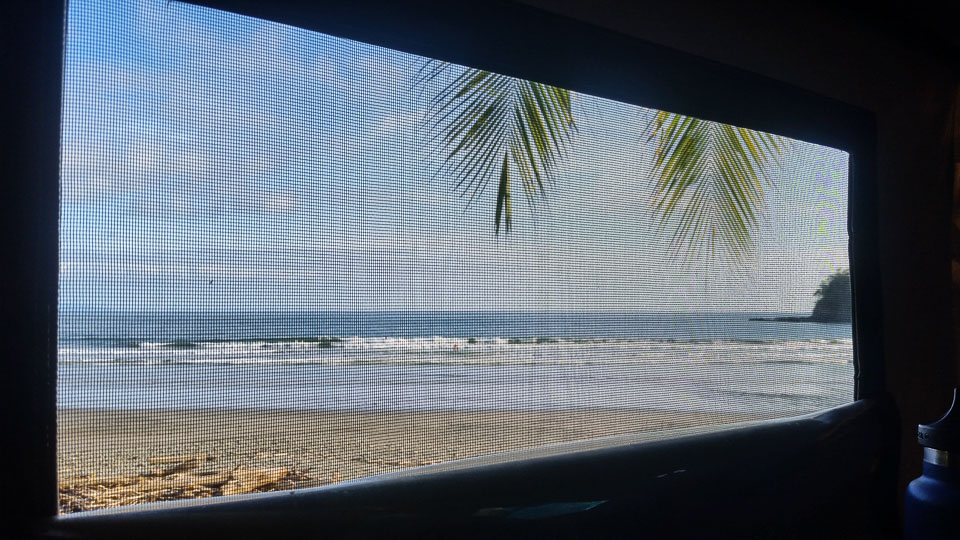 The place we chose in Mal Pais included cold showers, beach front camping, an oiled-up speedo-sportin’ camp host and a local gringo named Paul.  Gringo because, well, he’s a Gringo.  And local because he’d been there long enough to adopt a no-worries accent and consider shirts a superfluous garment.  The latter leading to that red-brown, slightly leathered skin that only melanin-lacking sailors, beach bums and women from the Jersey Shore can achieve.

Paul greeted us warmly and we took to sharing beers in the sand where he would tell us stories of his past life, current problemos and future aspirations.  A life of once working in the U.S. to now “bustin’ nuts” on the shores of Mal Pais.  Somewhere in between were bits about a dream house and a relationship that didn’t make it; the tale as old as time. 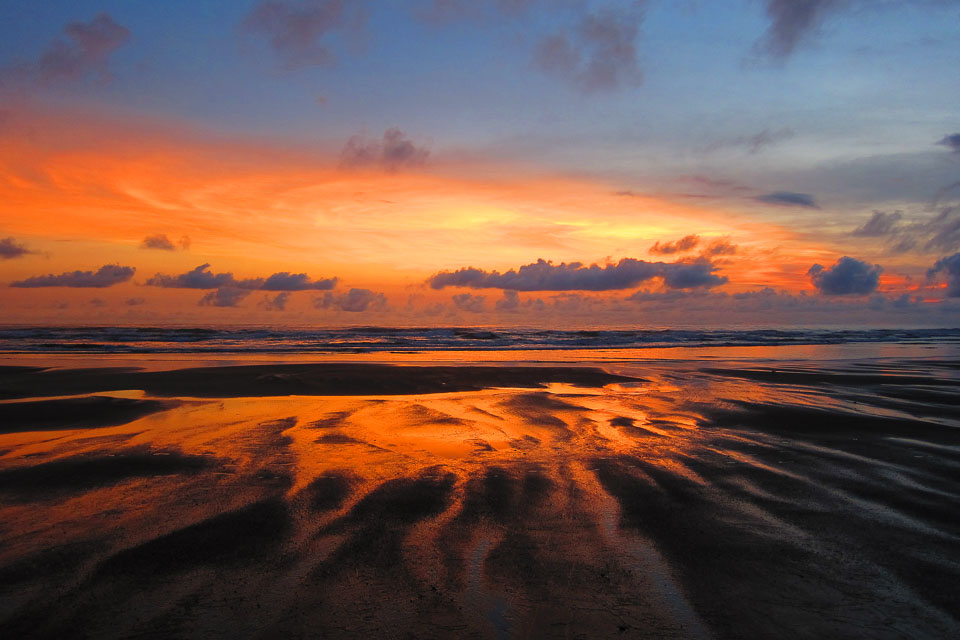 As the beers disappeared one evening Paul offered “If you buy, I’ll fly.”  Which meant I was to ride on the back of his moto with no lights and half a handlebar, down the pot-hole-ridden road to town.

“Stupid thing, I crashed it in the driveway the other night.” 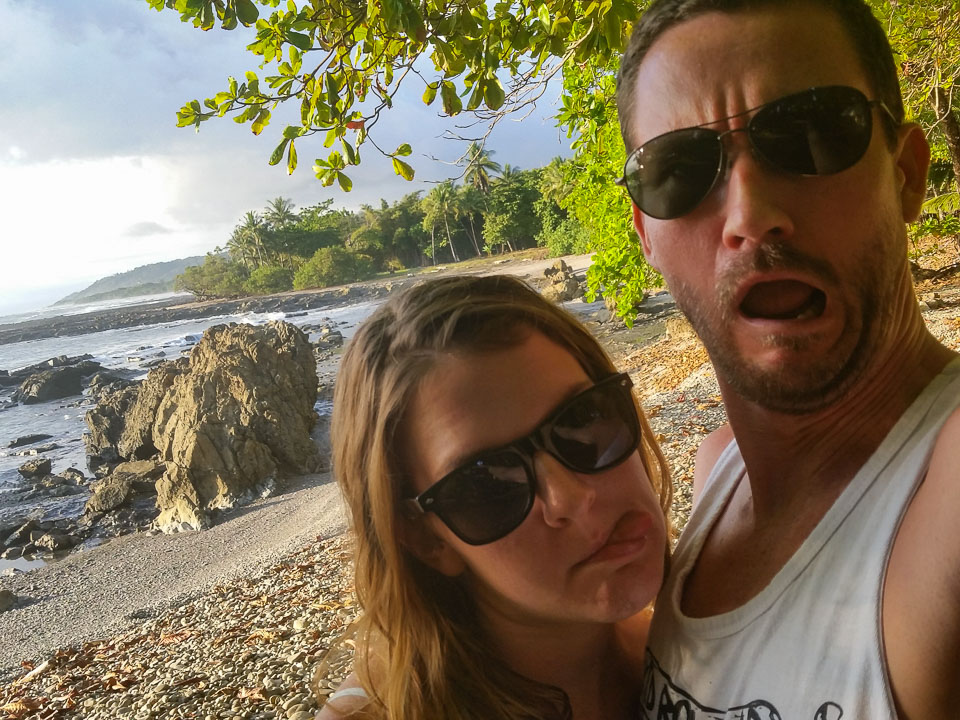 With a fading headlamp we cruised to town in a slalom pattern that hit more ruts than it missed, and returned to camp victorious.  Cracking our slightly shaken beers we toasted to a night of stars and new friends.  We also agreed to help Paul gather and “bust some nuts,” as he calls it, in the morning.

“The green ones are good for coconut water.  The brown heavy ones are better for coconut milk.  But nuts like THIS taste like candy…perfect for coco truffles and cajetas.” 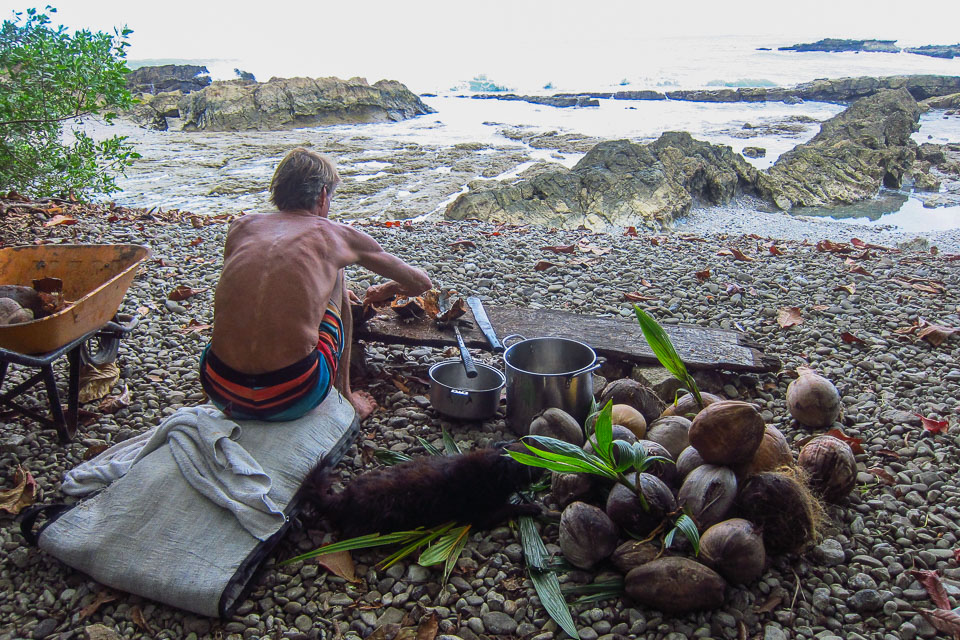 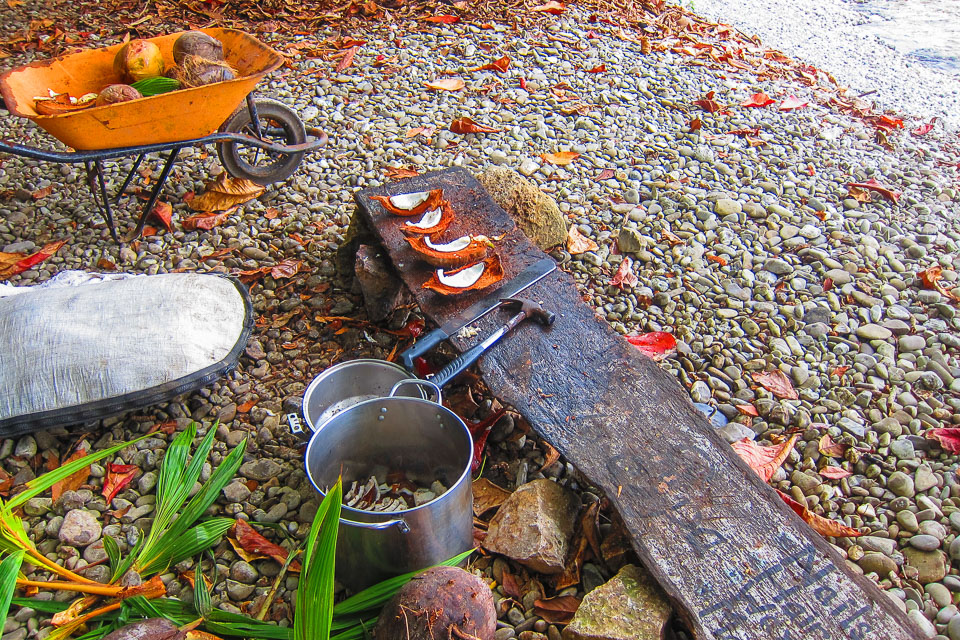 For two days we walk the shore collecting cocos.  Paul busts open the “nuts” with precision blows from his machete and peels out the meat, sharing samples along the way.

In the communal camp kitchen we’re given the order to collect banana leaves from the neighbor’s yard.

“Yah man.  Get the baby ones, nice and smooth.  These are gonna be our packaging.” 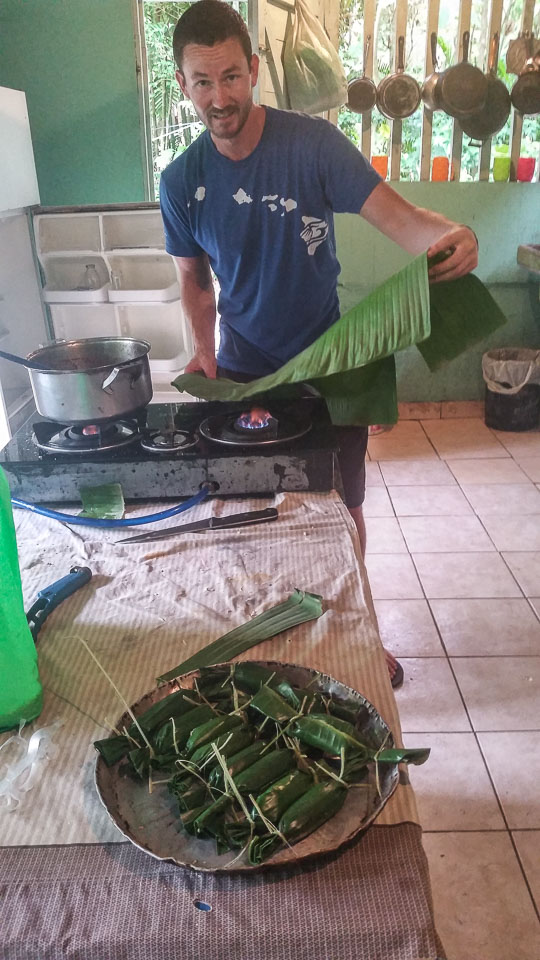 We roll a shredded coconut mixture into tasty cajetas de coco.  Simmer more meat with sugar for truffles.  Run the banana leaves over an open flame to make them pliable.  Knife off threads of the banana stalk as string.  More meat is pressed for coconut milk, and the result of several days of skimming and natural fermentation produces a batch of pure coconut oil.

For hours we work to prepare the goods for sale.  Somewhere within the sticky stirring, cooking, rolling and wrapping we learn that there’s a market on the other side of town and selling the coco goods before us is the only way Paul will be able to squeeze out rent; rent that’s due tomorrow.

Paul’s a good guy.  He’s sharp, funny and friendly; the kind of guy you want to see succeed.  Jenna makes signs to display names and prices, and I buy a bottle of coco milk to get the ball rolling. 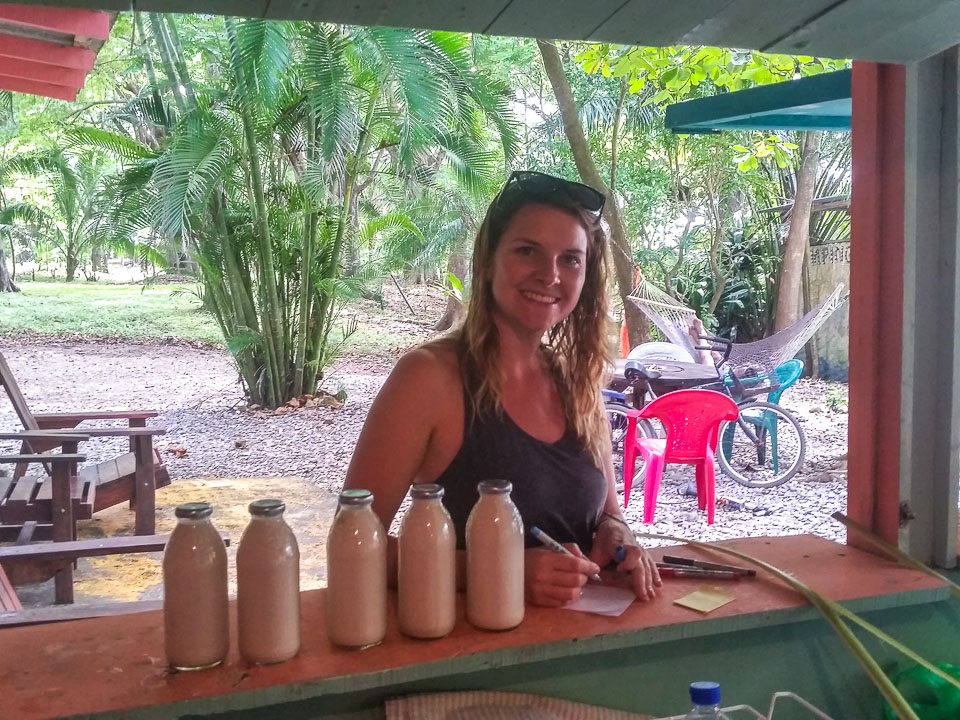 Later that day we ride rusty bikes to the market and find that, even with a good start, he didn’t make his quota.

We can sense he’s tired.  Not from the day’s work, but from waiting for the break that just won’t come.  Instead of cursing his luck, he simply moves on…

“No big deal, I know a lady who might buy these for her restaurant.” 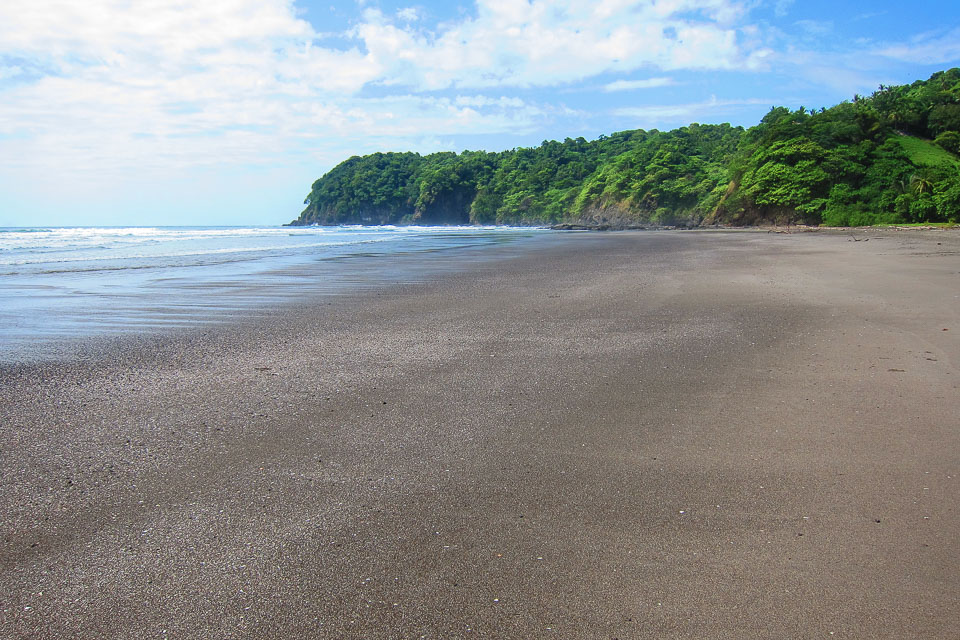 Keep on, Keepin’ on

On one of our last days in town, Paul stops by our rig wearing a shirt, with buttons and a collar to boot.  He’s got an interview at a restaurant.  He’s also got plans to manage a local property, bust more nuts, make more coco products and sell them in more places.  Nothing certain, but plans nonetheless.

A happy man with sun soaked skin, doing whatever it takes to get by.

While in Costa Rica we learned that Pura Vida means much more than “pure life.”  A Tico (local) explained that it means many things, including “life gets better,” “it could be worse,” “lucky to be alive;” and to say it is to remind each other to be happy.

If that’s the case then pura vida Paul, pura vida. We wish you the best. 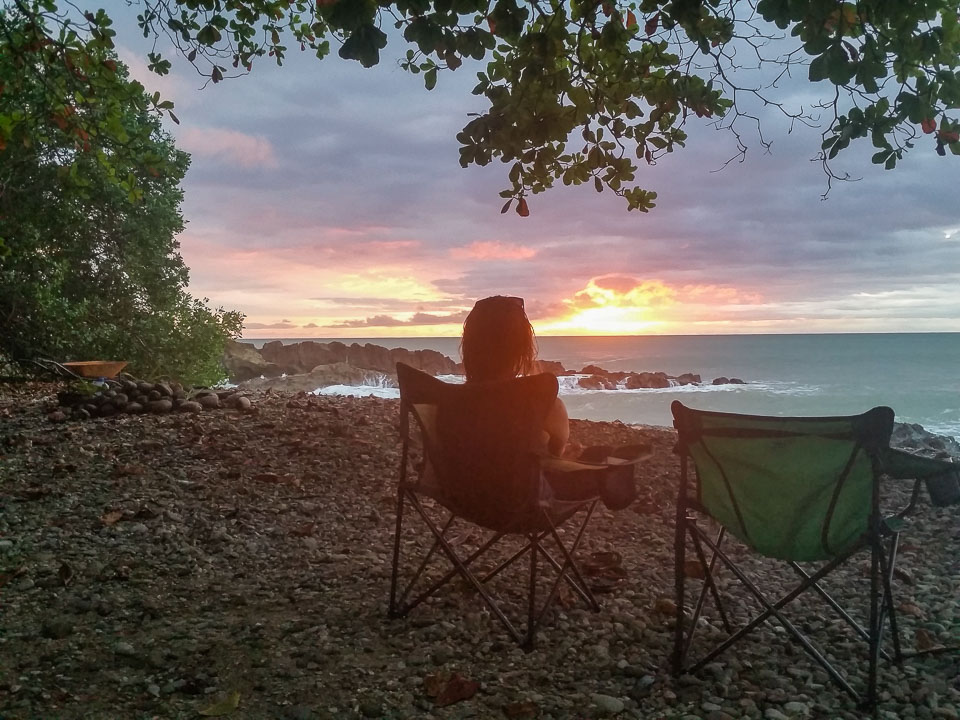 Video – Camping, river crossings, getting lost and towing a friend on the Nicoya Peninsula.

Next up….more from our time exploring beautiful Costa Rica.