I’m startled by the sound of an alarm, quickly remembering how much I despise waking so abruptly.  We’re in the spare bedroom of a good friend’s house in San Diego.  It’s still dark, and we’re no longer accustomed to operating in the wee-morning hours.  A late night of goodbye drinks, and an incomplete departure list causes bickering as we struggle to gather our belongings and move back into our tiny home on wheels.  Today is the day we cross the border and head south for what feels like an intimidating amount of time.  Today we transition from a U.S. road trip to beginning the adventure we planned.  In this moment we finally feel the weight of our decision, or we haven’t had our coffee and it’s just too damn early.  Either way, today is the day we cross into Mexico and get this show on the road.

The sun is up, the sky still dark, and drizzle dots the windshield.  As the wipers skip back and forth we wonder when the heavy stuff will arrive.  Our meeting place is a Starbucks close to the border, and like characters in a video game, our life levels increase with each sip.  Jacqui and Cameron walk in blinking red, and shuffle to the counter for a power boost.  Originally six, our caravan dropped to four due to some last minute projects.  We had discussed the looming storm, ultimately deciding to go for it, and wonder whether the two who stayed behind are better off.  Looking back, I wouldn’t have changed a thing…maybe 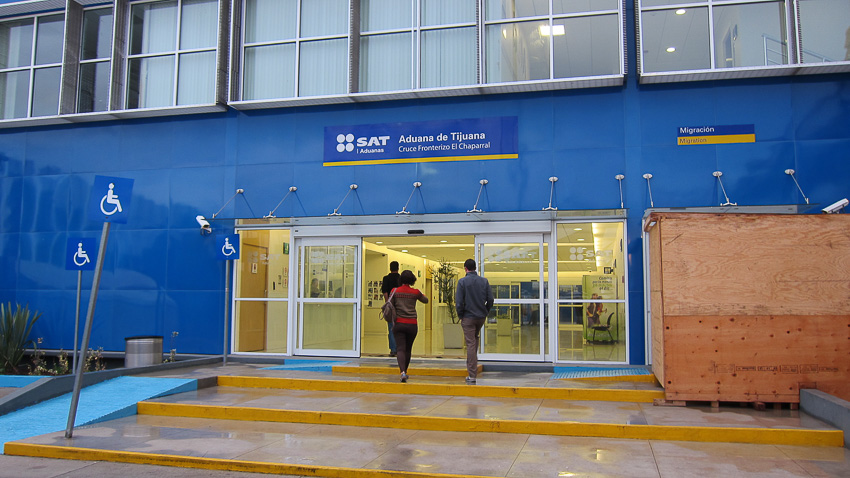 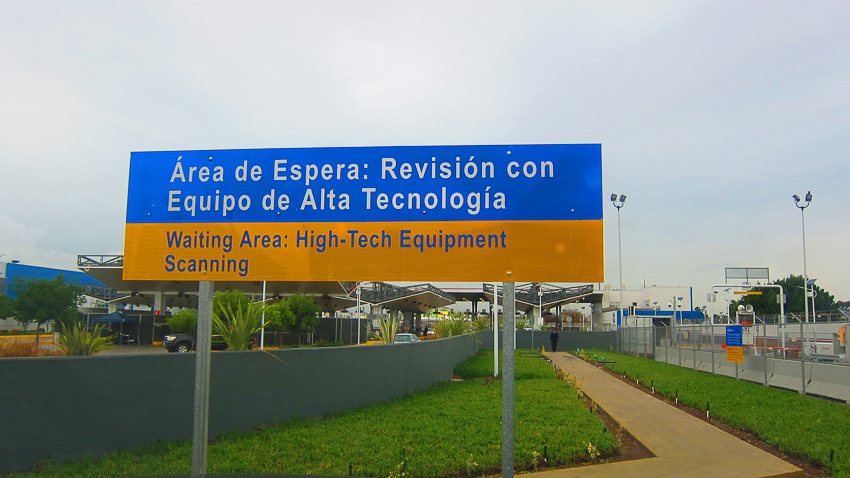 The Tijuana border is massive in comparison to Calexico/Mexicali.  We drive through one of the many entry lanes and reach our first official.  I roll down the windows and without hesitation say “Buongiorno.”  The Italian greeting causes suspicion and we’re guided to the scanning and inspection station.  Guess I should have had a second cup at Starbucks.  We’re scanned and parked for twenty minutes before I try my second attempt at speaking Spanish for the day, and ask what’s going on.  The girl looks up from her cell phone, checks the results screen and waves me on.  “Bienvenidos a Mexico!!!”…again.  Back in walkie talkie range we link up with Cameron and Jacqui’s van, the Pennywagon, and kick off our Mexico caravan. 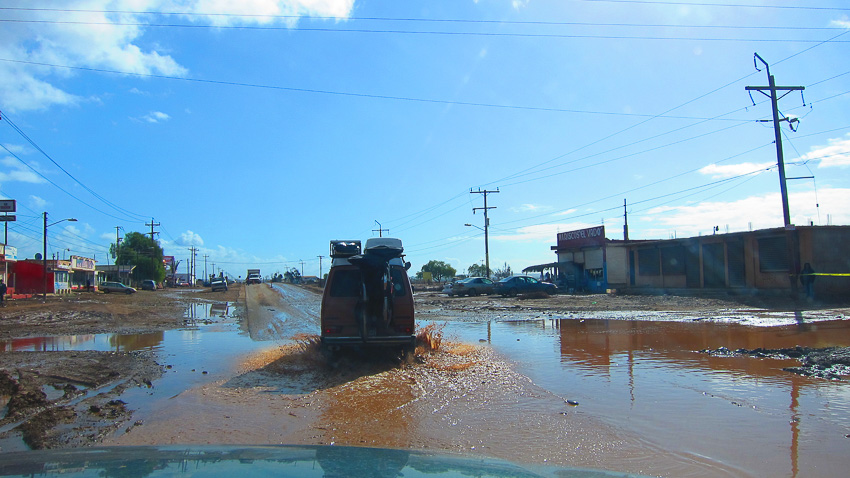 The directions to our first stop are as follows: turn right, drive twenty-ish miles and you’ll be camping on the coast.  We follow and bounce, rock, rattle and splash through twenty miles of shit dirt.  Muddy dirt, landslide dirt, washboard dirt, and pothole dirt leads us to even sloppier dirt and what we assume is a large brussel sprout farm.  We walk the tracks between the fields and find no exit; begrudgingly we turn around.  Bounce, rock, rattle, splash, and the same shitty dirt leads us back to where we started.  We park the rigs, turn off the engines, and slap together PB&Js; it’s still raining.  With forty-ish miles of dirt in the rear-view, we move on, not knowing what we’d just driven would look like an expressway compared to where we’d head the following day.  As the rain continues to spit we find our backup option without incident.  We share a beer at an empty hostel and settle in down the road, overlooking the ocean…not too shabby. 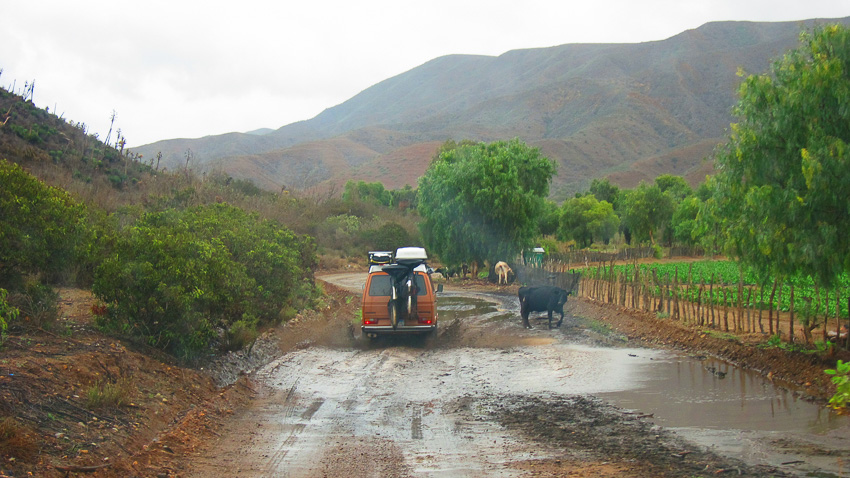 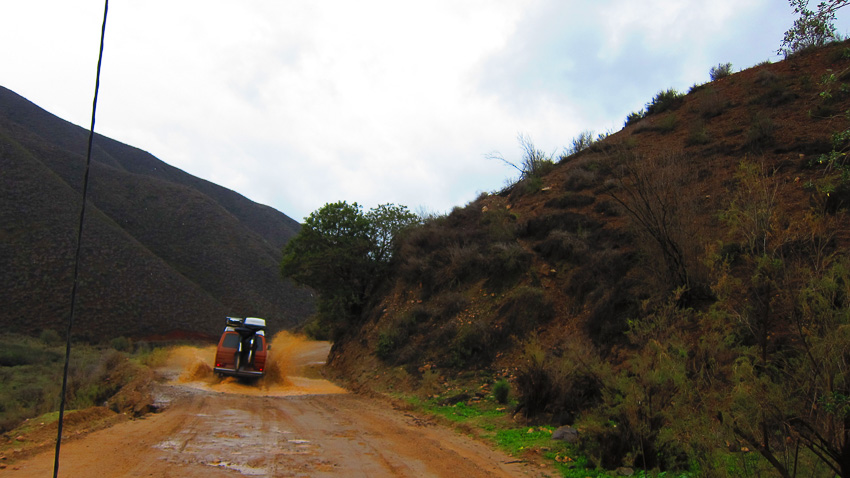 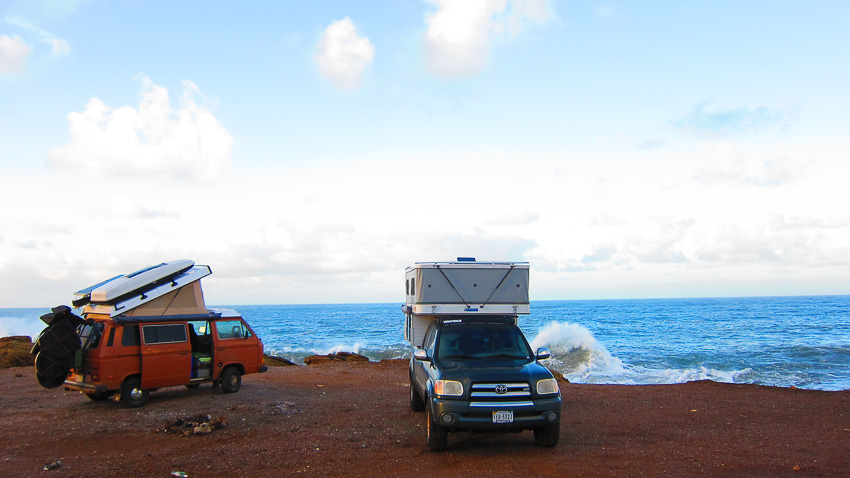 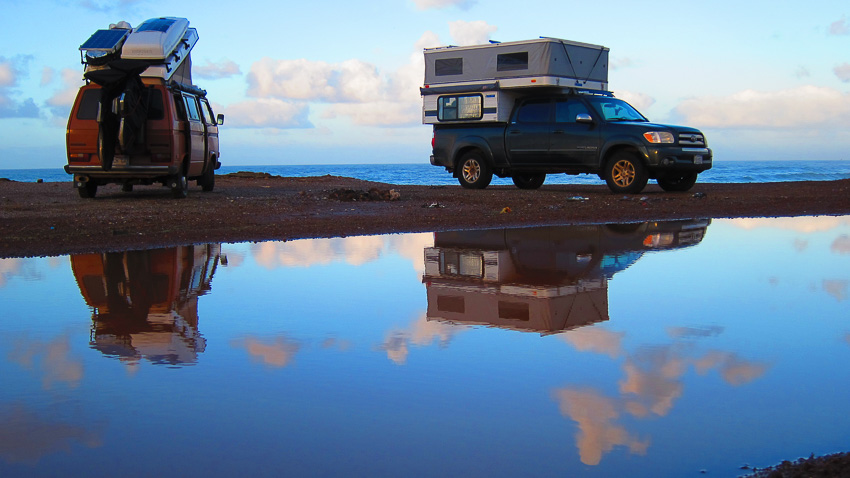 Day two we head further south towards a place called Punta Baja.  Jacqui and Cameron have been there before, albeit not during a week-long storm, and know of a fish camp on the coast.  We arrive in the small town preceding the road to the coast and can see the storm has hit the area hard.  Baja is a desert landscape that doesn’t take kindly to heavy rain.  Without the vegetation and soil to soak up the precipitation, roads disappear, streams appear and the land pukes mud.  We slosh through a few large muddles and grab tortillas at the closest tienda.  A few more muddles leads us to our first formidable obstacle, and a sign of things to come.  A fifty yard stretch of water has captured a small truck.  Tires spin and spit the slosh revealing the underlying tracks of mud.  Eventually the 4WD truck frees itself from the bog, and we’re up to bat.  I’m not so sure about hitting the hole with our truck + camper and the Pennywagon is a two-wheel-drive VW Van.  Cameron gets up to speed and “romps,” a term he uses frequently, through the deep sludge…I’m impressed.  In 4WD I follow suit, shooting dual rooster tails of brown water into the air and loud blasts of mud into the wheel wells.  The next few kilometers are the same..muddles, ruts, streams, and lots of “romping” through the mud…hitting holes at speed to keep momentum and hoping the camper will still be attached on the other side. 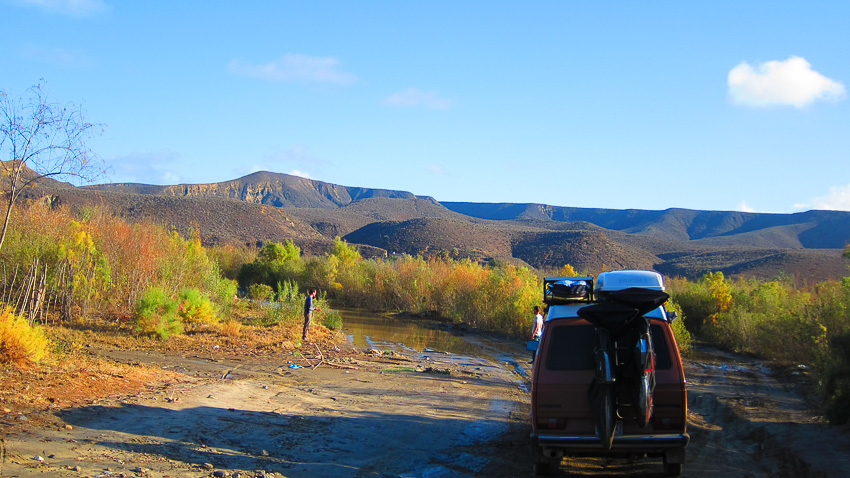 One particular section is quadruple the size of what we’ve encountered and could easily be described as a pond.  We walk the bank and poke at the water with a stick hoping to gain some intel.  At about a foot deep we choose the left route until a local points us towards the alternate.  To the right is a series of bogs that cut through the reeds and bushes.  All is well through the first two holes when suddenly we drop deep into the third.  Mud flies and the camper creaks as we climb back out of the hole…I’m pretty sure we passed a torn off muffler and half of a bumper on the alternate route but we make it out in one piece…sort of.  As we round the next bend the PennyWagon pulls over…blown CV joint.  Long story short, Cameron is a mechanic and he has a replacement on hand.  Within minutes, he’s suited up, under the van, CV out and ready.  Only problem is he needs C-Clip/Snap Ring pliers to finish the job and the long nose pliers we have aren’t cutting it.  We’re debating riding back into town, through the muck, to find the part when I remember I have a Dremel.  A little grinding on the long nose pliers produces the tool we need and the CV is good to go within an hour.

During this period, friendly locals in their 4WDs stop and ask if we needed assistance.  One gave us his best “road ahead very bad, don’t go” hand signals when he learned of our plans to head all the way to the coast.  I won’t say whether it was a good or bad idea to continue on, but we had come too far to turn back.  The idea of celebrating with a cold one on the coast after a day of bogging was fuel enough.  “Where we’re going, we don’t need roads.” 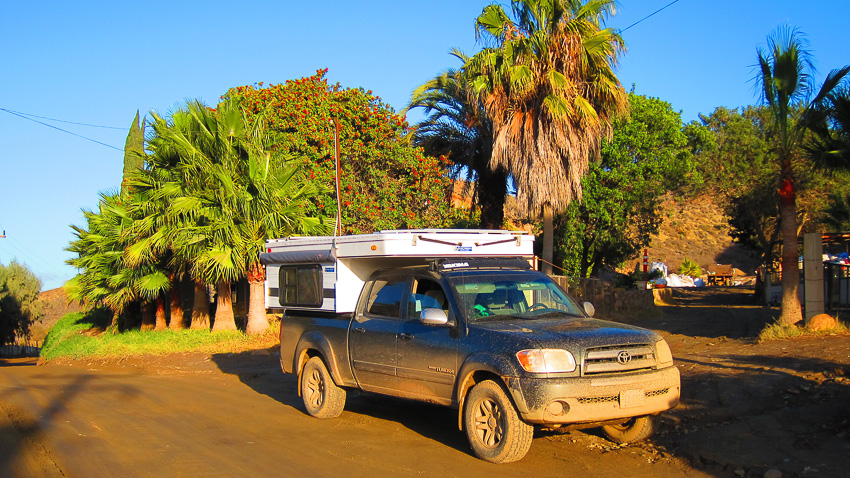 And that we did.  On a hazy evening, we grabbed our cheap beers with still clenched hands, climbed down the bank, and watched the sun set over the water.   The stress of the day melted away as we recounted the ride in and held our heads back like pelicans taking down a meal; the stars were incredible.

Maybe it was 2am, maybe it was 3.  All I know is we shared the same thought when we heard the rain begin to pound…The Road Out.  As it continued, there was no sleep to be had.  If the “roads” were bad before, they were surely getting worse.  I peered out of camper window fearing we would be swept off the cliff.  I had checked our position and noted that our site was on solid ground the day before, but the volume of water running under the truck was enough to check again.  Just after 6am, Cameron knocked on our camper door, already donning swim trunks…I knew exactly what he wanted.  We could stay at Punta Baja for several days and wait out the rain and subsequent “road” repair, or get out before it got any worse.  We decided to go figuring we could continue to camp right where we were, or camp wherever we get stuck on the way out.  Within 100 yards we realized what we were in for. 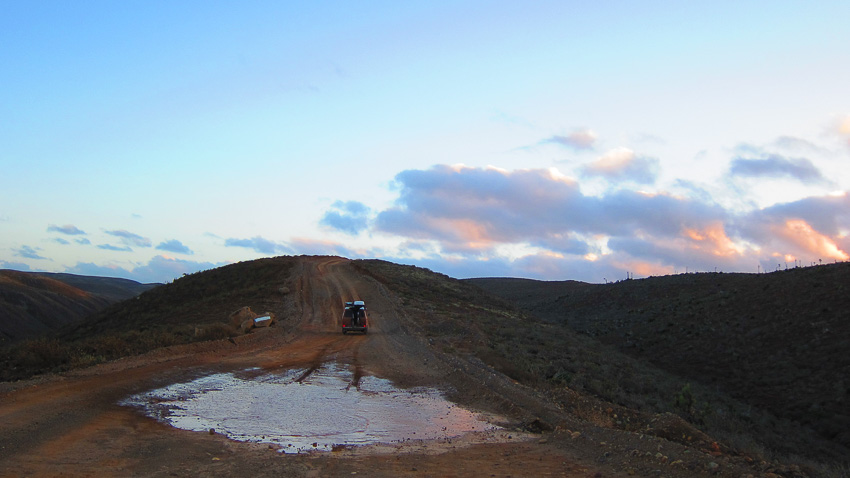 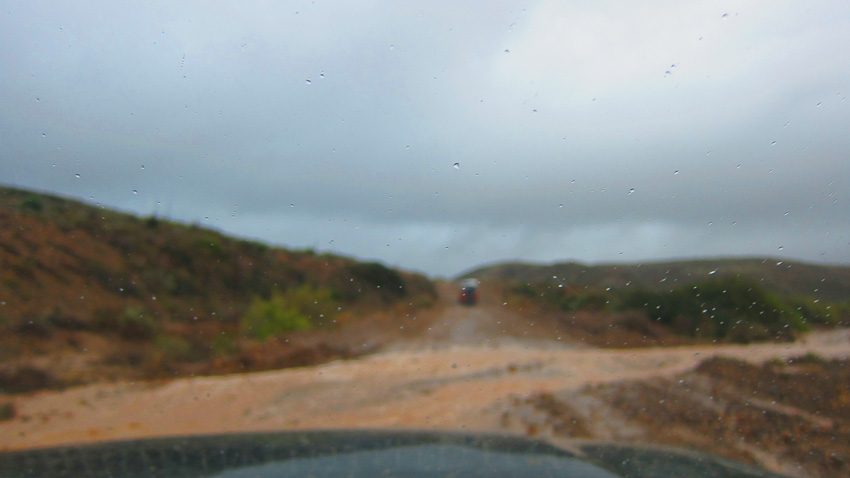 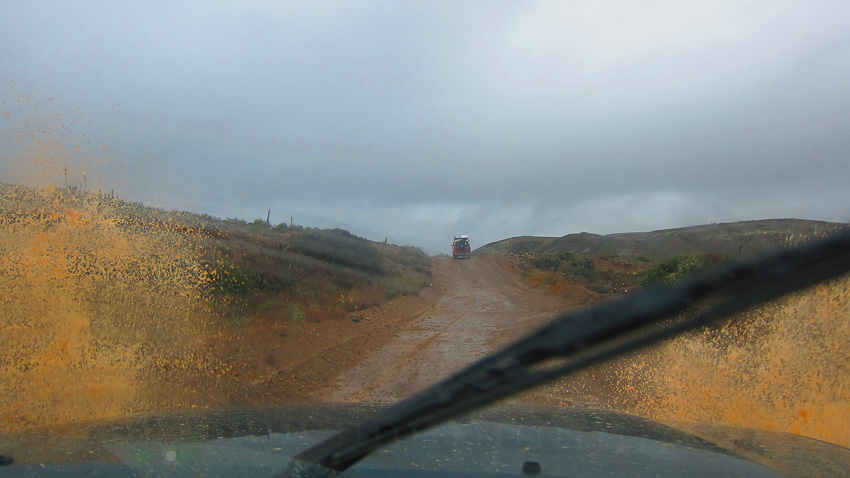 The best portion of the road in had become peanut butter mud filling every bit of tread.  Sliding in 4WD and searching for traction we did our best to find the shallow points where streams had eaten away at the road.  With entire sections missing, we timed our downhill slalom slides and sped up when downshifting and brakes wouldn’t suffice.  Still impressed with the Pennywagon and Cameron’s driving, we met their match when a wash-out at the bottom of a long hill killed any possibility of momentum.  A third of the way up the Pennywagon’s tires, caked in creamy Skippy, spun in place. 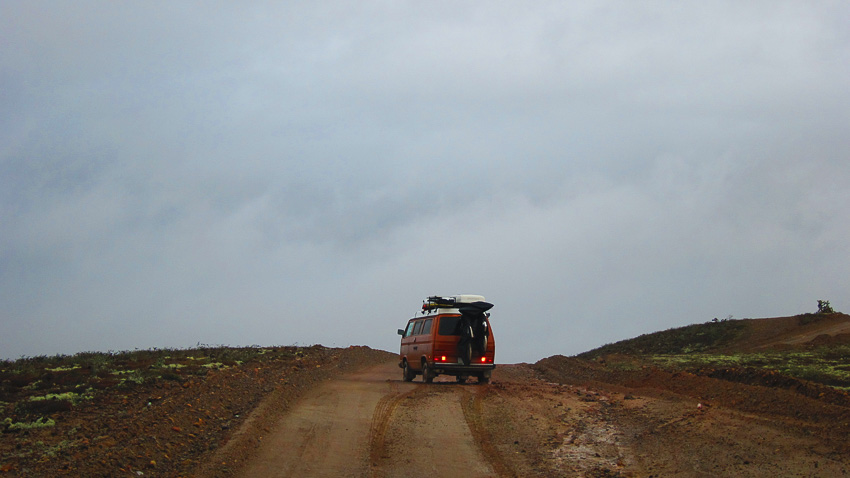 I was doubtful the Tundra would make it considering the lack of a locking differential.  Cameron and I stood a few inches taller on our platform shoes of mud, and considered the options.  When prepping for this trip I purchased a tow strap and shackle with little thought of ever using them.  Less than 72 hours south of the border and I was ready to pretend I knew what I was doing with said equipment.  What ensued was a lot of spinning, slipping, sliding and an ugly tow to the top. 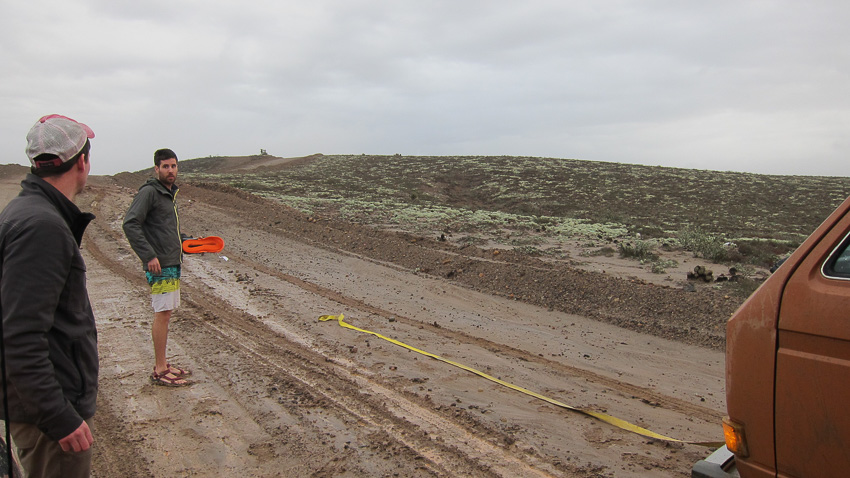 As with hiking, you curse the way up until you find yourself heading downhill.  Another stream, not there the day before, had deleted portions of the road revealing large rocks and larger sink holes.  We missed some and hit others.  If the truck could curse I’m sure it was singing my praises.  At the bottom of the hill we stopped to check out the largest muddle we’d seen; and luckily Jacqui glanced back at the Pennywagon to notice the pool of oil puking onto the ground.  The ruts and rocks of the last downhill had claimed a large portion of the Pennywagon’s oil pan…no bueno.  Imagine my surprise when a tractor approached our defeated looking group and immediately offered a tow back to town…gotta love Mexico.  With the Pennywagon’s ride to town secured, we were left to navigate the worst portions of the trek solo. 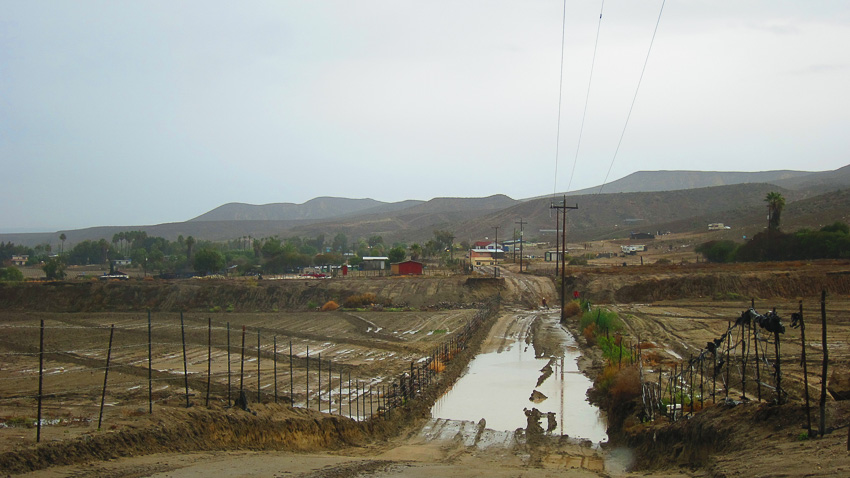 I’m not sure whether I had grown numb to conditions or simply wanted out but we mobbed our way back faster than we came in.  In town we let plates of huevos rancheros calm the nerves but the refried beans only reminded me of what I’d been driving through.  In the end the Pennywagon was towed through miles of muck by a kind farmer;  we found an aluminum welder in a tiny town ravaged by mud; and a friendly tire shop owner let Jacqui and Cameron use his lot to install the newly welded pan.  In only a few hours and maybe 50 bucks, we were back on the road.  After linking up with the two straggling members of our caravan we spent the night in the desert, well lubricated yet dry as a bone.  🙂 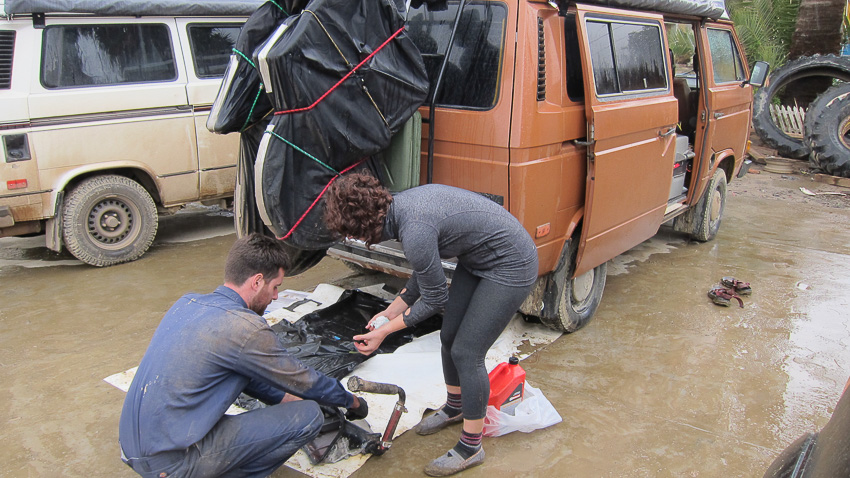 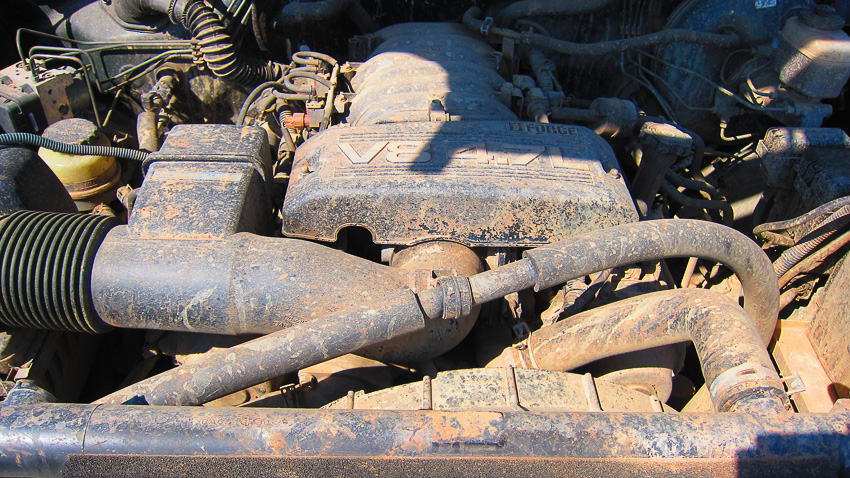 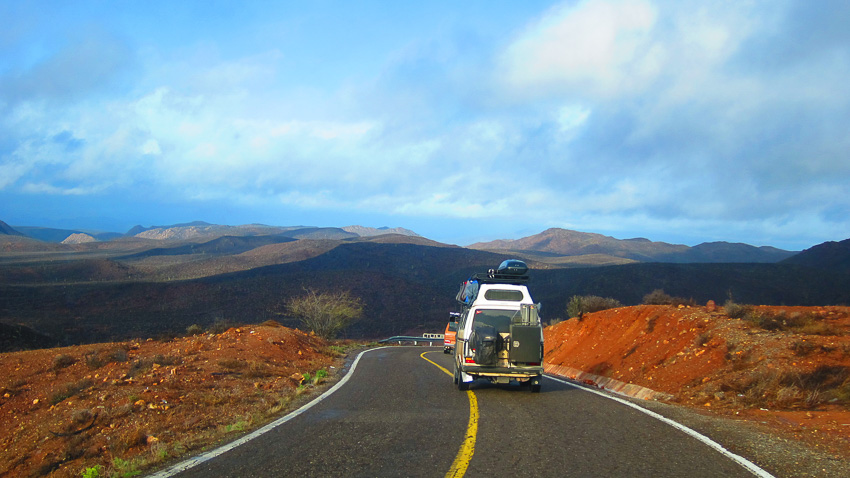 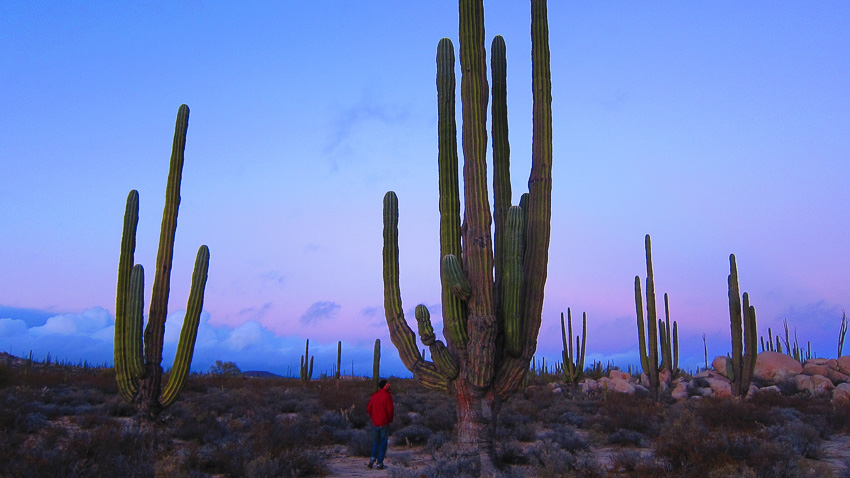 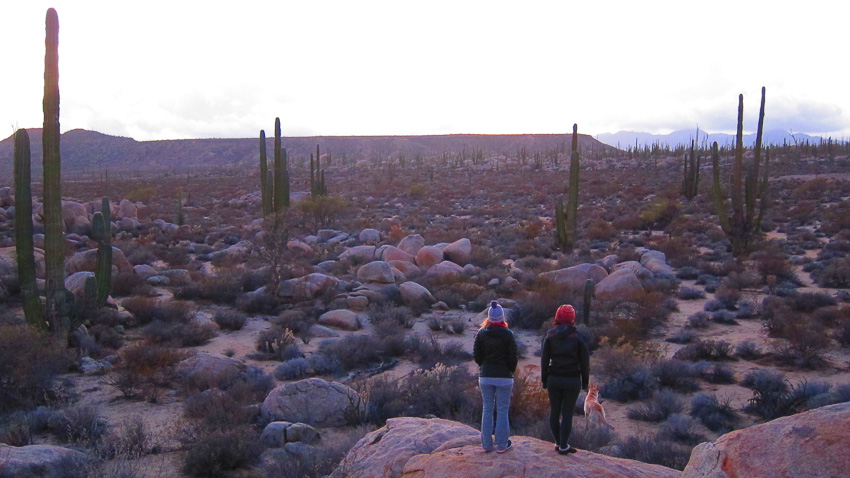 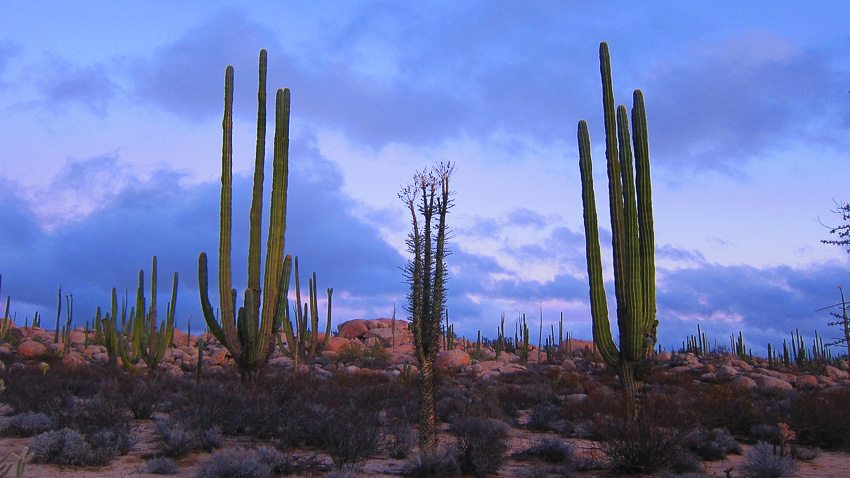 Unfortunately we didn’t take many pictures of the terrible sections since Jenna had a a firm, and quite appropriate, grip on the oh-shit handle.  Luckily, Jacqui and Cameron (FollowTheWind) did capture a bit of the driving in their awesome video below:

Next, we check out Baja sans mud… 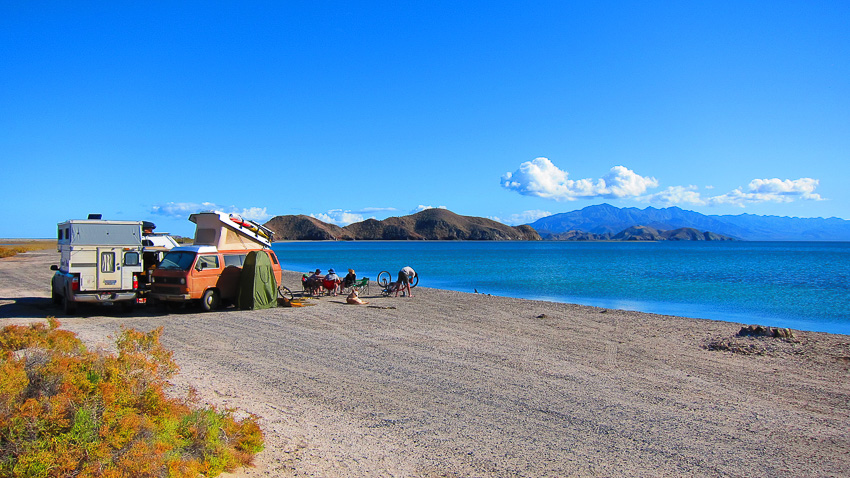